Walsh Kunkel is a guitarist, performer and composer from the Baltimore area. He has been practicing his craft for a little over 10 years, and shows no signs of stopping. Taking private lessons at the Maryland Conservatory of Music at the age of 13, and later performing in the youth Classic Rock ensemble at the Conservatory, Walsh surrounded himself with music educators, and like-minded peers throughout his youth. Beginning his collegiate education at Harford Community college in 2012 under the instruction of Benny Russell, Walsh began to explore the intricacies and nuances of Jazz music. Walsh was selected by Russell for solo performances within the concert program of the Harford Community College Big Band.

After graduating with an Associate of Music at HCC, Walsh continued his jazz education at Towson University. Under the instruction of musicians such a Dave Ballou, Anthony Pirog, and John Lee, Walsh refined his improvisational, compositional and reading  skills. Evidently proficient on his instrument, Walsh was personally selected by trumpeter Dave Ballou to participate in numerous residency programs with experienced performers such as Kris Davis, Drew Gress, William Parker, Ellery Eskelin and more. Walsh graduated in May of 2019 with a BA in Commercial/Jazz Performance.

Since graduating, Walsh has performed in venues, clubs and art spaces throughout Baltimore and D.C. These include Rhizome in Takoma Park, the revered Bertha’s Mussels, and local listening room An Die Music. Post-graduation, Walsh challenges himself to seek out new learning experiences. He attended the Alternative Guitar Summit camp led by Joel Harrison three years in a row. There, he studied with guitar masters such as Julian Lage, Mike Stern, Ben Monder, Miles Okazaki, Steve Cardenas and more.

Walsh has led his own bands, playing original music with varying styles from jazz to experimental. Challenging himself and pushing his own boundaries, Walsh will continue to evolve as an artist by way of education and performance and sheer love for the craft. 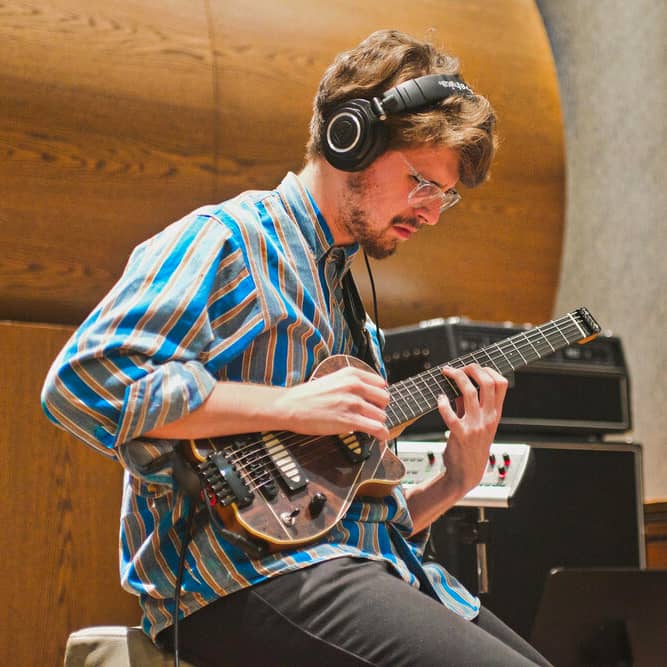 Schedule a Lesson with Walsh